Full Name
Mr. Antonín Fejfar
Job Title
deputy director
Organization
FZU (Institute of Physics, Czech Academy of Sciences)
Speaker Bio
Antonín Fejfar studied physical microelectronics at the Faculty of Mathematics and Physics of Charles University in Prague from 1981 to 1986. In 1991, he defended his dissertation thesis on the organic semiconducting thin films and then went for a post-doctoral stay at Kyoto University, Japan (1991–1993). Since 1994, he has worked at the Institute of Physics of the Czech Academy of Sciences (CAS). He returned to Kyoto University in 2007–2008 as a visiting professor. Since 2014, he has been a visiting researcher at the École Polytechnique in France.

In his research, Antonín Fejfar focuses on physics of thin films of nanostructured semiconductors for applications in solar cells and photonics. He is the (co)author of more than 140 publications, which have been cited more than 1500 times (h-index 23) and of 1 international patent. He has led several grant projects, including international ones (H2020, FP7, Barrande, DAAD).

In April 2017, he became President of the Council of Sciences of the CAS after serving as its Vice President for Mathematics, Physics and Earth Sciences from 2011 to 2017. He is a member of the Committee on Energy of the CAS, a member of the Scientific Council of CEITEC Nano at Brno University of Technology and of the Nanometer Structures Division of the International Union of Vacuum Sciences, Technologies and Applications (IUVSTA). He is one of the main organizers of the international summer school series on Physics at Nanoscale. He has supervised students on graduate and undergraduate levels as well as high school students in the Open Science project. He is actively involved in science popularization, in particular in the areas of solar energy and nanoscience.
Speaking At
New role of thin films in advanced photovoltaics 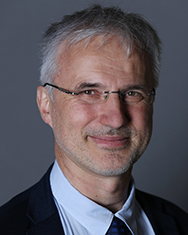